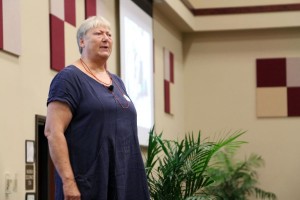 FLORENCE, S.C. – Helle Heckmann says it is vital for parents to focus on creating healthy routines for children, including nutrition and sleeping patterns.

Heckmann, an author and kindergarten teacher from Copenhagen, Denmark, spoke in Florence Friday at the 2018 Early Childhood Champions Summit.

The summit, hosted by The School Foundation and Florence One Schools, marked the beginning of a five-month public awareness campaign called Count 5.

The Count 5 campaign will take place during September, October, November, January and February. During December, there will be a book giveaway to people taking part in the initiative. At the end of the campaign, there will be a citywide celebration, according to Debbie Hyler, executive director of The School Foundation.

Florence One Schools Superintendent Richard O’Malley welcomed the attendees and Calvin Robinson, who is a pastor at Trinity Baptist Church, led the invocation.

Heckmann spoke on her concept of Five Golden Keys, or a set of five ways for parents and caregivers to help prepare children for life and education. During her presentation, Heckmann discussed the importance of each key: sleep, movement, nutrition, routine and love.

“They nee d us, the adults, who have a consciousness, to help raise a child,” Heckmann said.

Heckmann said in the modern-day, fast-paced world, it is important for parents to slow down to meet their children’s needs well because their needs are different than the needs of adults.

"We forget that children are not little adults," Heckmann said. "They are something really, really special, and the first seven years are so wonderful. That never ever returns."

Heckmann also said it is important to pay careful attention to a child's needs because the early childhood experience has a large effect on the child's future.

Heckmann said each of he Five Golden Keys depends upon the others to work.

She said the keys are not hard to incorporate into one’s daily life, but it takes time and commitment.

During the summit, Tammy Pawloski, who is the director of the Center of Excellence at Francis Marion University, spoke about how the Florence community can incorporate the keys into their daily lives. Pawloski gave basic applications of each key, and led a discussion with event attendees, challenging them to come up with their own list.

Florence One Schools and The School Foundation decided to focus on the early childhood years because almost 90 percent of children’s neural pathways are developed by age five, Pawloski said.

“If we change the experience, we can change the brain,” Pawloski said.

“We have 2,000 between birth and the first day of kindergarten,” Pawloski said. “We have 2,000 days, Florence. How will those days be spent? We have a precious opportunity. We also have a responsibility. Brains are built, not born, and we are the architects of our kids' brains."

At the end of the Summit, Duke Energy presented a check of $9,800 to The School Foundation, to fund a book giveaway for the month of December.

According Hyler, executive director of The School Foundation, the money will fund the production of the book “Hello, Big World,” which is a book outlining the Five Golden Keys.